As part of my historical mapping of Makaska, I have been working on the Ohunkagan 1895 Exposition & World's Fair. The concept is somewhat modeled on Chicago 1893 or St Louis 1904. Think of it as a turn-of-the-last-century temporary theme park.

The Exposition grounds are mapped on the shores of "Lake Great and Unnamed" (and when will we ever name it?), east of downtown Ohunkagan. The city raced to complete the beginnings of its new elevated electric train network in time for the fair, with two stations accommodating visitors and directly linking to downtown. The grounds also feature a temporary train terminal where VIPs and special excursions from around the FSA can park their charter trains, and an intramural ferry and streetcar for getting around the park.

Here is a map link: https://opengeofiction.net/relation/175412

I have two things for the OGF community.

First - feedback? What's missing? What do you recommend? Remember this is for the year 1895. The theme is "developing our frontier" and features lots of exhibits on industry, resource extraction (with a focus on Makaska's primary industries: coal, lumber, wheat, buffalo/cattle, iron ore). What would you like to see me add?

Second - if you own or coordinate a state or country (which is most of us!), which existed in 1895 (maybe not everybody!), then you need an exhibit at the Exposition. The FSA "state exhibits" are in the red circle area in the screenshot below. The international "country exhibits" are in the yellow circle area. You may take over an existing building labelled as "State Exhibit" or "Country Exhibit", or you may create a new one in an empty spot in those circled areas. No permission needed, just do it. I'm trusting you all to behave yourselves, and I don't want to be swamped with messages. Worst case, I'll delete your edits as inappropriate. 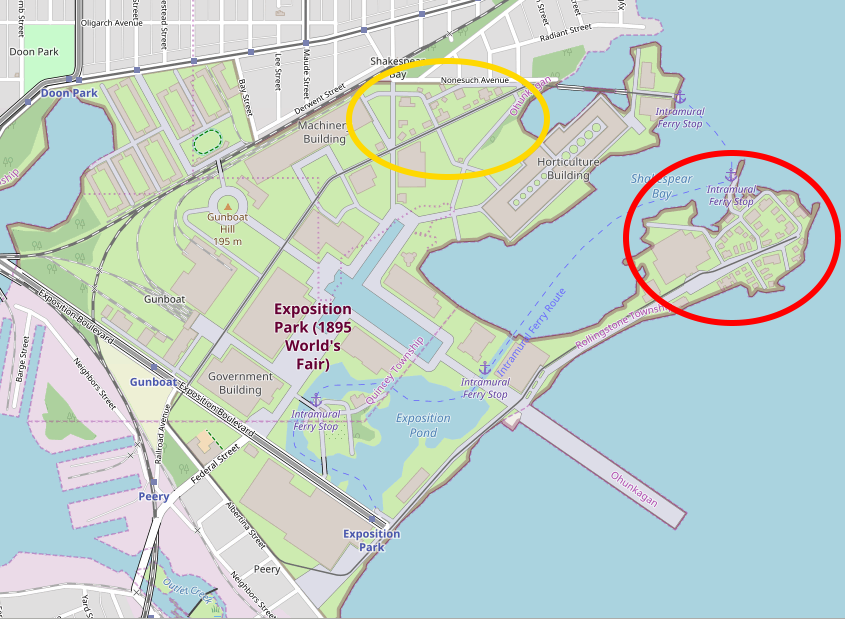 Wow it's fantastic. What a great job you did there. So many details, it really looks realistic. I love the different elements you added there, specially the Wychelle building. Bravo!!

@newflanders - "credit where credit is due", the Wychelle Cow is by mapper CartographerKing. It is, indeed, excellent, and I'm planning to make it into a long-lasting Ohunkagan landmark: The Wychelle Cow is a famous kitschy restaurant - "Come to the Wychelle Cow for that famous Ohunk style frybread! Take the tram to the beach and get off when you see the giant cow."

I would very much like to see more mappers participating in my invitation to map their state or country exhibits! It can lead to creativity such as this.

Newflanders, and Luciano... thank you! <3