I have been working on Tojmidia for about 6 months on-and-off, but now I'm hoping to have a more definite goal for where the country is headed.

In the past few weeks, I have added administrative boundaries to all of Tojmidia and have undertaken work on Faarva state/province. Faarva state/province has seen the majority of my time. Fallo itself will take at least another month to complete, by which point I will move on and try not to add tiny pointless details like mapping individual trees (an urge I have to fight).

Once Faarva is done being roughly mapped with a few pockets of detail (Fallo and surrounding areas), I will start mapping Bolgan, a significantly larger city in Karitoft. Alvermod will come after that, (it's more awesome because it has a coast) and Olbayan, the capital, after that. This means that it may be months before Olbayan sees significant mapping due to my preference of completing an area before I move to the next.

The general geography of the country also needs work. Kadu river's riverbank is broken (and too wide in most parts). Many large rivers have zero detail and were sloppily made. The coast is okay, but unrealistic in parts (like the ugly peninsula just north of Alvermod). The current forest areas in the country are closer to rough guidelines of elevation and wilderness than actual forest cover. Honestly, I'm really only proud of the flag :(

Once Faarva is complete and I've added some actual detail to Tojmidia's general geography, I'll put a bit of work into fleshing out Tojmidia's wiki page. Tojmidia's history is still a rough draft, but I have a general idea of what I want the country to be, both politically and historically speaking. My initial plan was to have Upper and Lower Tojmidia be separate political entities in the style of BiH or the UK, but I decided to make them more united because it would be easy for a pro-unificationist dictator or even a representative government to keep them united due to Tojmidia's small size.

The language of Tojmidia takes elements from Mongolian, Swedish, and Finnish. Nothing more complex than that because I'm not a linguist. The only rule I have set up is that Lower Tojmidian-speaking places don't use Å.

I've been steadily improving on scale after my initial delusions of the size of Tojmidia (Alvermod was originally supposed to have a population of 1.5m lol). As far as I know, Fallo and the surrounding area, which are the most recently mapped, look fine to me. Can more experienced mappers confirm this?

Does anyone have any feedback/comments/naming ideas? Thanks :D

To me, Tojmidia has been nicely sketched at an overview level. It might need some further general features such as rivers flowing from or into the neighbouring countries to look less artificially isolated. Maybe one of your two neighbours would agree on mapping these features with you or allowing you to do so? For further details, you can always "remap" something when you start working in details in a given area or whenever you feel like doing so: jumping from building unfinished seaport infrastructures to carving a remote cliffed valley into a mountain range is not probited.

I like the details in Fållo area. It looks like a nice small-sized lake resorts with maybe Mediterranean pine forest covering the mountains (or hills? as there's no elevation indication) to its east. The scale seems alright compared to European towns (I had the spa resort of Vittel, France in mind).

Is the lake supposed to be natural, artificial or a natural lake enlarged by the building of a dam?

For borders on lakes and rivers, you should use an equidistant line between the shores or banks (for river, use the waterway=river or waterway=stream as member of the relation for border). For international borders, you can always use the concept of Thalweg for mapping, but due to Tojmidia location in what is likely to be a Mediterranean climate zone, I can't imagine large navigable rivers requiring to probe the riverbed to determine exactly where's the middle of the navigable channel.

For consistency, you may want to give Tojmidian names to your streets, roads or natural features. You can always make use of "name:en=" tag for translation. I understand Tojmidian has two dialects. You should figure out how close they are, even though you don't need to go too far into linguistics. Is Farvaa Lake, Varvaa Lake in the other dialect because the unvoiced "f" sound doesn't exist so it is instead voiced into "v"? Does it has a complete different name (e.g. Germany vs. Deutschland) ? Does it bear some resemblance as it goes in real world Rhine, Rhein, Rijn, Rhin all pronounced differently? For regular words such as "street", "bridge", "school", you can always keep an Excel file with the translation according to the dialects.

I hope it would help a bit.

My main feedback is that I'm pleased to see someone actually thinking systematically about their country and mapping, and not just drawing random streets and motorways and calling it "fun."

I think your approach is right - get a general idea of how things are laid out, and then go start putting in details.

The one thing I would suggest - work up some kind of idea for the Topo of your country, even if only offline. If you don't, you will regret it later because drawing Topo after you've mapped a lot is really painful (as I've learned with my work Ardisphere - link: http://opengeofiction.net/#map=8/-21.420/122.165&layers=T). You don't have to have a deep level of detail, but know where your mountains are, know where the ridges and valleys are, know what parts are flat or hilly or mountainous.

Overall, though, you're ahead of at least 80% of the mappers on OGF, in terms of intentionality and method. I look forward to great things!

Thanks for the feedback. I've thought about it and I'll try to work on place and street names. I will think about the dialectal differences between Upper and Tojmidian.

As for Faarva lake, I'm not sure of the answer to your question. I made the lake early on, without any special planning or ideas of how the geography and river system would work. If I keep it the way it is now, I think having it be a natural lake enlarged by a dam is the best way to go. Thoughts?

The other option I see is to change the shape of the lake and merge it with the water system (i.e. it flows to the ocean like the great lakes). I made this quick mockup in Photoshop to demonstrate such as possible change.

(left one is my proposal, right one is current) 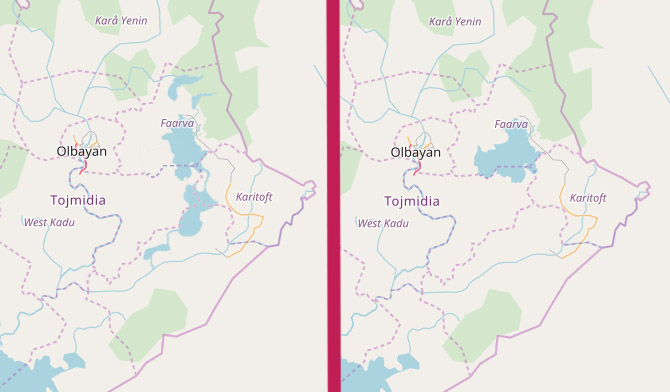 This idea looks better than what I had before, but I worry that having such large lakes flowing into the sea is unrealistic due to the relatively small size of the mountain range. Such a lake formation looks like it formed glacially like the Great Lakes, and I'm not sure whether Tojmidia is far south enough to have had glaciers during any possible ice ages. But that's my attempt at making Faarva lake seem more natural.

Thoughts? Do you think I should change the lake shapes or is it fine how it is?

Thanks for the feedback. I agree with you, but I don't think I did anything too special. I'm just working in the same order as the wiki guide.

As for topo, I have no interest in actually going the distance and painstakingly drawing contour lines, but a rough topographic map is a very good idea that I hadn't really considered. Unfortunately, I don't know much about geography and topology, so would it be acceptable to model it off of real-word topography in a similar fashion to what is recommended in OGF:Making realistic cities?

I prefer to do large geographic features (e.g. rivers, mountain ranges, population density and topo maps) on paper so I would most likely make a rough topo map in in pencil crayon.

@Sp33d3h - you'd be surprised. You're the first mapper I've seen who has admitted to ever looking at the wiki guide.

No worries about topo. Again, it's just a good idea to have it worked worked out in your head. Some people do little sketches in MS Paint or such tools: e.g.

As Luciano said, there are many processes that could explain Lake Faarva formation. 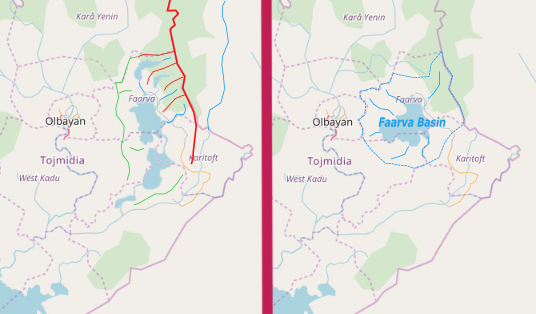 If you keep the lake as today, you may say that the lake is located at the lowest point of an endorheic basin, so you don't have to pay attention to any outflow. It can still be a natural lake located in a rather flat area whose water level has been raised by a dam, probably somewhere on the southern shore. The flat terrain would explain the bulgy shape of the the lake with rather shallow water (a fault in the middle can always be imagined) on a large band along the edge.

On your proposal, I don't find the lakes extremely large, probably 5/6km wide. You can always make them more slender if it shocks you. What you explain their formation could be the existence of a graben with one horst being the mountain chain along the border (in red) and the other one being hills (in green). I've changed some rivers' course so that it follows the thalweg that the lakes seemed to indicate. The graben is not necessarily completely flat, land layers could have been wrinkled and rivers would have needed to fill these wrinkles creating lakes before flowing further south.

For both situations, you may imagine a dramatic landscape (replace green-line hills by mountains) or a softer one with landforms gentle fusing into the next one.

It is really up to you to choose what fits better the idea you have in mind for Tojmidia. When your decision is made, you can draw natural=ridge ways to mark the highest points so that you will know where and how to draw rivers and streams, where to position saddles or how to map a road (does it sharp bends before the slope?)

I would love for my country to have diplomatic relations with you. my country is Planoria.

So far your country is great, looks like a country with some rich history.