Wiki has many troubles for the moment, so I decided to addapt the content of OGF:Ohesia to a user diary and also make you part of this project. Here I go.

Ohesia (Oǵemetézt in ohesian and Ochezien in kalmish) is a country located in northern Antarephia. It consists of a federation composed by about 8 regions (which still don’t have a name).

This country was an old kalmish colony and its linguistic situation is similar to South Africa. Kalmish is specially spoken in the capital and its surroundings, and a native language (conlang) is spoken in most of the rest of the country. The size of the country is about the size of Honduras.

Name of the country

The main idea is to create a similiar situation to real life Turkey and Turkmenistan. Ohemian language is the main language of the Antarephian family as well as turkish is of the Turkic family.

Everybody is invited to map in this collaborative country, specially german people. Regarding the languages that will be used, there is further information down below.

(A part of this point is copied from the OGF:Moonshine Archipelago wikipage, a nice project with similar characteristics that shows that collaboration can work)

Things you can do at anytime without asking. But be aware that concurrent editing without coordination may result in conflicts. Make sure to know how to resolve them.

Things everybody wants to do, but we don’t need too many of them or we need coordination. Remember it is not a blue territory

Things we just wont allow even if you ask us. Exceptions may still be possible in certain circumstances with a very good reason.

There are 2 spoken languages:

About the implemention of the conlang, users have two options:

The conlang is part of the Antarephian family (you can check it in the wiki when possible) and it has many common words with other languages like Lyrian, Holmic or Ohemian.

Any doubt or question will be replied here, as well as you can send private messages. Hope you like it and I’d be glad to see you in Ohesia

I created this document in order to help users with toponymy.

@MisterBean When I was thinking in this project, I got inspired by Yugoslavia. In that country, there were some similar languages and their border were not exactly accurate regarding the political borders.

For Ohesia I took that I idea, incluiding a colonial language like South Africa. For the native countries, I thought about 2 conlangs from the same family. I haven’t talked about it because a conlang is already ok for the moment, and if it works, I could include a second one.

This future conlang would be similar to actual Ohesian, so a situation Spanish-Portuguese could exist. That’s to say, two languages that are very similar, but they would have some significant spelling changes that could make them look different.

Here you can see a stub map about languages that I did when thinking about the country (which may differ a bit regarding the map that I post in the user diary, because this photo is a little earlier): 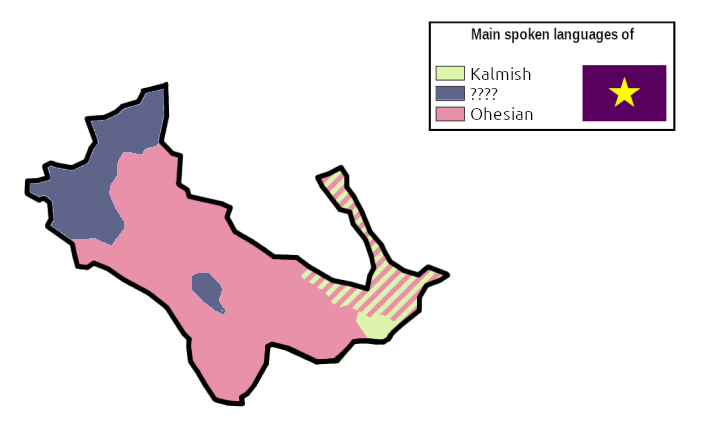 I would not consider this a pidgin, but it’s something like filipino or Mariana language.

Each language of this family has many loanwords from the languages that influenced them. For example, the conlang that is spoken in SM (lyrian) has its source of new words in Spanish, while Ohesian has it in German.

Mind if I take on the northernmost of the 4 islands near Kgocpa to have a try ? Just to see how ‘Kalm clashes with the tropics’ would work out. Mapping would be kalmish mainly.

@Marcello For sure. Go ahead!!

Yes! The actual coast is just a draft. As soon as I’ll have more free time I’ll start to detail it (you could check some of my works in SM), but if others users can work in it too it would be even better.

Hey, I know this is a bit late, but I’m interested in participating. I currently need a break from my own country so when I come back to it i have more ideas in mind. I’d be interested in city detailing and rural mapping. Let me know what you think, but I’d love to help out! here are some of my most detailed things by far: *Burwash in Michisaukee *[Small Section of Rural Town in Khun Pan](https://opengeofiction.net/#map=15/-2.7113/125.6630} *L’ile de La Colombe Reconstruction

I am currently working on a larger project to map more rural features in Khun Pan, so keep your eye peeled for that. Feel free to assess my work and make your decision.

What is the story behind the indigenous culture itself in terms of working out more of the story in the Ohesian (conlang) areas? Were they a somewhat developed culture or a nomadic tribal culture? Were they oppressed or integrated into society?