I'd like to ask; what kind of traffic lights are in your country?

Posted by plainoldbread on 7 November 2017 in English (English)

So you can show an image or just describe them. 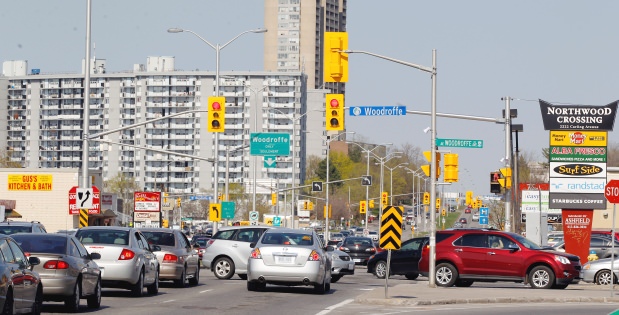 If you have a specific list of different kinds varying by state, you can.

Hi. I'm from Canada, and there are two main orientations of the traffic light. Horizontal and Vertical. Most of the provinces and territories use vertical, but Nunavut doesn't have any traffic lights whatsoever at the time of posting. I also used google images as my source and cross-referenced it with other images to make sure, as I have not visited all of Canada. A Traffic light in Toronto, Ontario with a transit signal, U-Turn signal, and pedestrian signal. Most lights aren't so complicated. 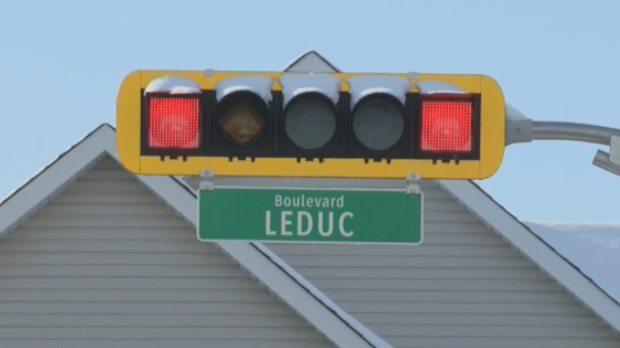 A Traffic light in Montreal, Quebec. This is a simple horizontal traffic light, and notice that there are no pedestrian signals. While I visited Montreal, I noticed that the locals just crossed when the light was green!

There is one Territory that stands out: Nunavut. There are no roads connecting to Nunavut at all, and the few roads that they do have aren't paved due to permafrost. They currently don't have any traffic lights at all, and they probably don't need them, as there are very few cars driving around. 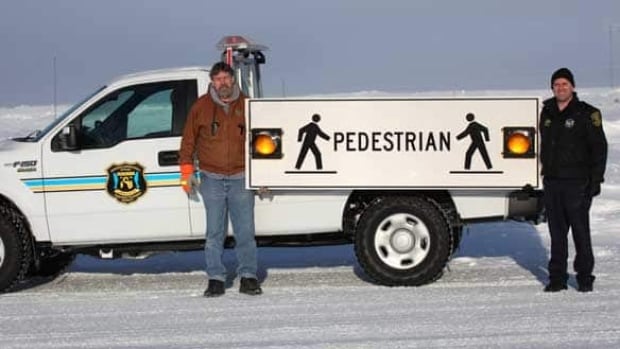 The closest thing to a traffic light in Nunavut. It's pretty self-explanatory.

The 'Kind of' places are the areas that have both orientations in very similar proportions, like this intersection in Alberta: There are both orientations in the intersection, but for the most part, Alberta uses horizontal.

As well, each Province/Territory has their own way of making a traffic light, so not all Vertical ones will look the same as the one in Ontario.

Vodeo uses the styles of New Zealand and Australia, as it does for most things. Both styles are almost identical save for very minor differences (whether the pole is orange or unpainted, and whether or not there's a white outline), and it's up to the provinces to determine which they want to use.

For reference, here's a set of lights in New Zealand: 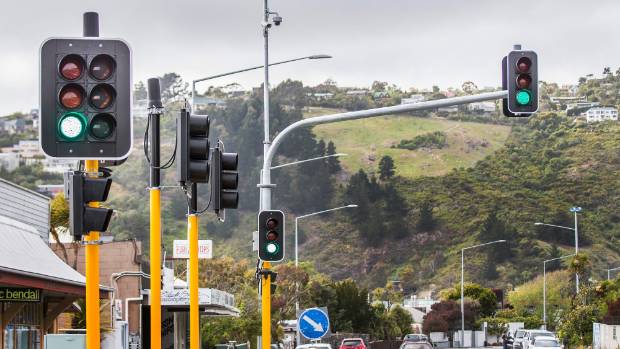 ...and one in Melbourne: 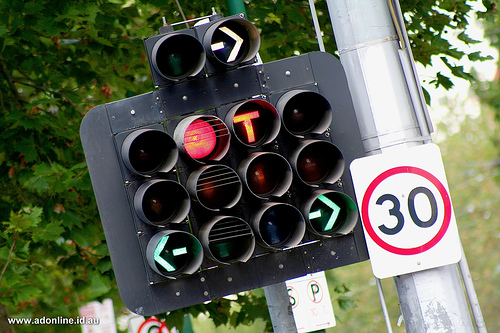 In the last ten years or so, countdown timers have begun popping up in some of the larger cities. Generally these are only found in very busy areas, such as downtown Saviso or Holme. 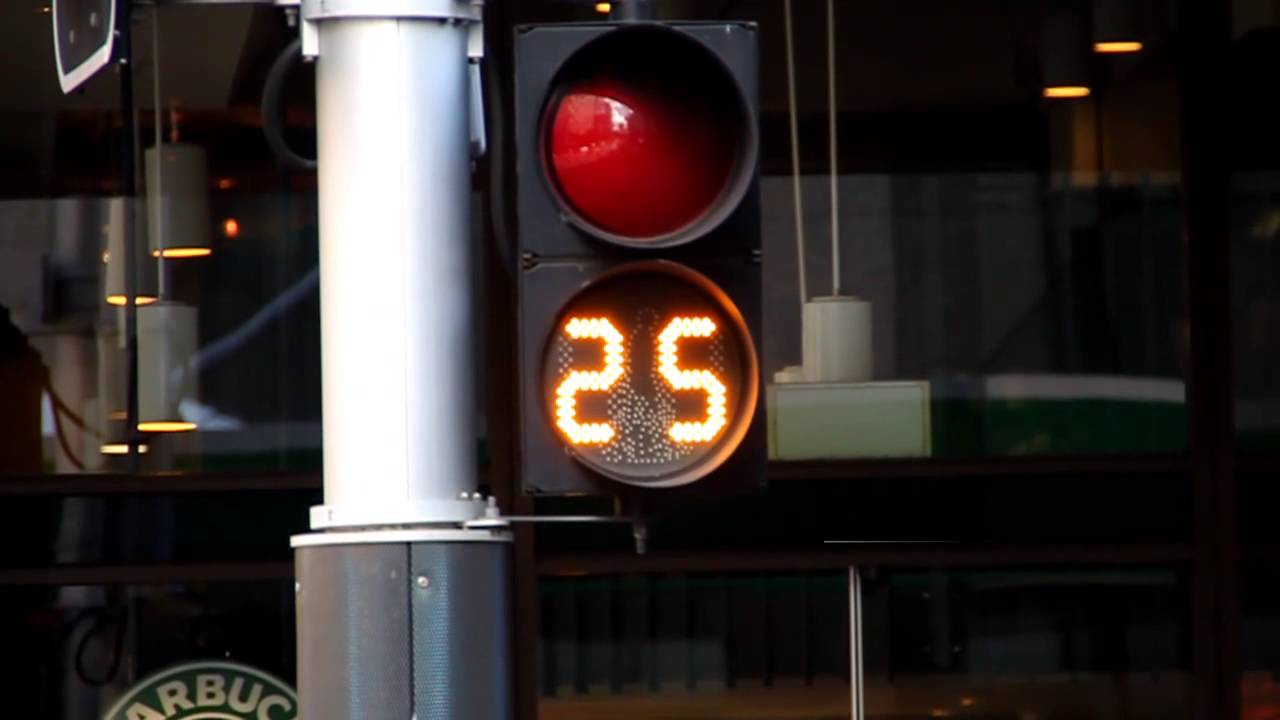 As an added bonus, have a set with some road signs, which will surely be a topic of discussion in the future. 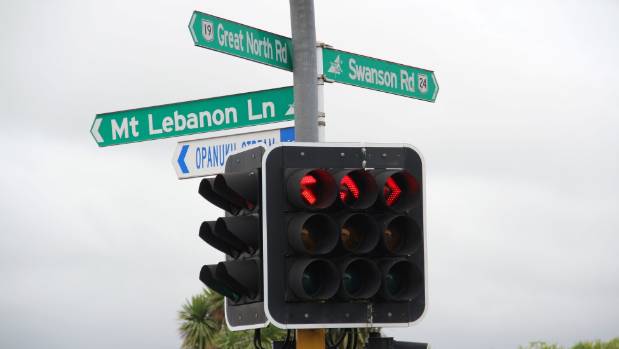 Finally, a use for this image! It's been sitting in the wiki for a while. XD So in most cases, for major intersections, Freedemia has a unique nationwide system with their streetlights that applies to most areas.

The lights themselves tend to be vertical, but are almost always attatched underneath a horizontal pole, which holds the larger streetsign. The pole setup and length, as well as the overall design, vary from area to area, but burgundy or green metal are pretty common throughout the city.

As for the streetsign itself, to create a sort of uniformity nationwide it's made so that it's always easy to tell where you are. The city name (or if outside of a city, the state name), the national flag, and the city seal/logo if applicable are all prominently featured on the sign.

(Some have debated in the past whether including the flag on all major street signs was too patriotic/nationalistic- but as of today the practice is still the default and streetsigns are expected to match the national standard.)

I imagine the streetsigns to be lit at night, likely by small lights shining on it from either above or the sides.

A lot of the inspiration, especially in shape, size of the street sign part, and the color of the metal, came from some of the unique streetlights/streetsigns I saw living back in Phoenix, Arizona: Pedestrian lights would probably be somewhere between the following:

The bike part would be slowly becoming more prominent due to the increasing amount of bike usage through the city. But overall, I'd imagine red stop sign with black hand up for "Don't walk", a green person walking for "Walk", and an flashing orange stop sign with black hand up for "wait/hurry/finish crossing", along with a pedestrian countdown clock. Maybe I'll design it soon. Nice pictures. In Sing kanga I think it should be similar to Singapore's

In Ünglend (my country) traffic lights are like in Europe, but differ a bit. In almost all cases they have a blue street name sign that also has an arrow where there are One-Ways. Some traffix lights have a little white Sign that says Stop on the Line at red (text differs by state language). Some lights in a city (Augusstadt for example) have a white sign which there is distance on it. That indicates the next crossing with traffic lights.

In the United States (my home country), traffic light designs and orientations vary. Many states have vertical traffic signals installed, and on the other hand, the horizontal traffic lights can be found in some states including Wisconsin, Florida, and New Mexico.

Lights in the UK are black with three colour lights and sometimes filter arrows. The amber phase is displayed in both stop and go cycles (simultaneously with red).

Karolian traffic lights are usually painted blue. This is rationalised as being more visible in snowy conditions. Another interesting feature shown in this image is the tapering of the poles: the idea being that if the pole is struck in a collision, it will bend in a predictable way that will minimise injury. The segregated cycleway has its own eye-level lights and cyclists get their own green phase in all directions.

In Finland, most traffic lights are vertical with grey vertical poles. Arrow lights, if used, sometimes only include green, or green and yellow as in the picture linked below. On priority streets with speed limits 60-70 km/h, a thick white surrounding line is used. Pedestrians have separate lights with picture symbol, cyclists don't. Most lights turn off in the early morning hours with little traffic. Helsinki has special unicolor lights for trams.

Unlike Finland, Bloregian lights have orange poles matching the flag color. We Finns are too careful with colors, a bit of playfulness does good for an arctic country.

Here are some Paroyan traffic lights, mostly inspired by Netherlands, Germany and the UK. (Sorry for the large images)

The regular traffic lights phases are a bit different. Like Sarepava explains above about the amber phase being displayed simultaneously with red is the same in Paroy, but the amber light is blinking as a caution sign the light will turn green soon. Besides that, the blinking amber light will also appear with green just before the solid amber phase. This solid amber phase has been absent for a long time (it went straight to red after the blinking phase), but it is added back since 1998. Most of the time they are plain black, but sometimes other dark colors are used. Arrows in the same colors can be used to segregate directions. Most traffic lights are vertical, but some are shown horizontal where it is more convenient that way.

The lights for the pedestrians and the cyclists is a simpler form of the Paroyan traffic light. With the amber light missing, the green light will start blinking when it will turn red soon.

And of course there are lights for bus and trams, inspired by the ones in the Netherlands and Belgium. An explanation can be found here.

Interesting to see that like on real earth, some countries have traffic lights before intersections, and some after.