An update on the Free Republic of Jefferson

Posted by Thunderbird on 27 March 2019 in English (English).

It’s been over a year since I posted a diary entry so I figured I’d let people know what I’ve been up to. I just finished Patriotland International Airport. Is the airport missing anything? This is my first attempt at mapping an airport!

In addition, I’ve been working on some harbor towns such as Port Perrine and Gundock. Both of these towns are inspired by older suburbs of Philadelphia, PA in South Jersey along the Delaware river. The block style is typical of this area, and implies thin, deep row homes with alleys behind them. The shore of Patriot Harbor is quite working class, situated near a lot of industrial sites.

Here are the long-term plans for my territory. 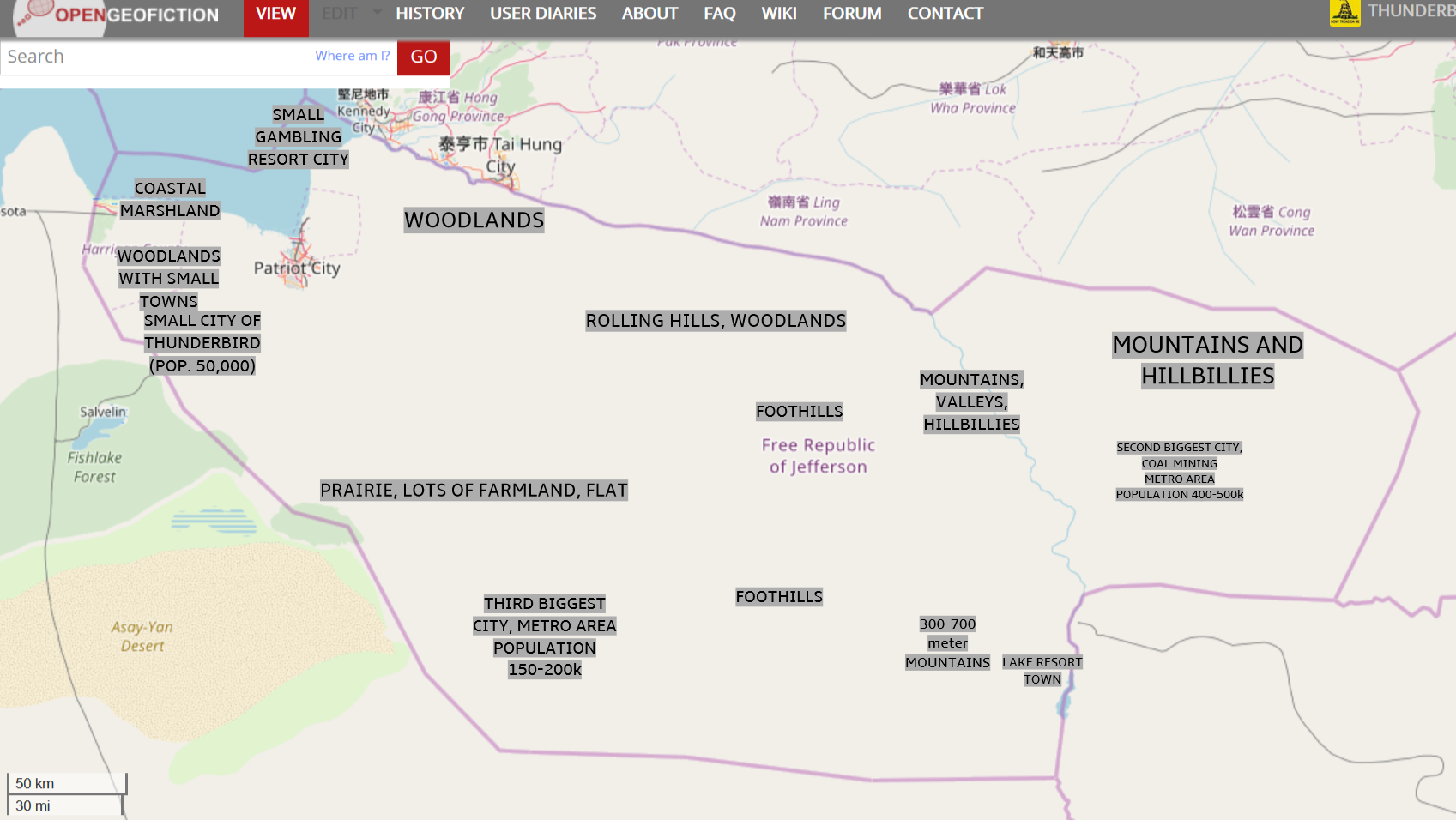 I would be interested to hear what you all think of my work so far, good or bad. I have so much more planned in my head, it just takes years to get it all mapped correctly. I map differently than most people, focusing on one small area at a time.

Thanks for taking the time to read this, even if you only comment a few words I would love to hear any feedback.

I finally finished another long semester of school and I haven’t had much free time to work on Jefferson. Although I’ll be taking summer classes, I will be back now!

As I move forward, I want to take a look at Patriot City and get feedback. Specifically, what needs to be changed to improve the city?

I prefer to work on small areas of detail at a time and you can see that from the way the city is half finished. Since I began my OGF career at the city center and then mapped out, I expect that you guys will have many suggestions for that area.

I eventually intend for the city to have a population of between 900,000 and 1 million within city limits, and 3-4 million in the metro area (which I haven’t even begun).

And yes, an airport has been planned for the longest time, here, it just hasn’t been mapped yet.

So please, give me your harshest, most honest critiques!

Posted by Thunderbird on 14 November 2016 in English (English).

There has been talk on and off about the way we communicate here on OGF. I agree with some others that creating a forum would be the best way to collaborate. What we have with User Diaries is good, but topics disappear into the past within days. With a forum we would be able to continue discussions even on topics that were started weeks or months ago.

I know we have talk pages on the wiki, but you have to actively seek those out one by one. A forum would provide more visibility for ongoing discussions.

As far as funding, I would be happy to chip in for server hosting fees. I’m sure some of the other mappers would do the same.

What do others say about this?

It's been 1 year already?

Posted by Thunderbird on 1 November 2016 in English (English).

Hello folks! I just happened to realized I created my OGF account 1 year ago today, the time has just flown by.

Below is Patriot City after one year of work. This is a city inspired by Philadelphia and its surrounding area.

I’m working on filling in the entire city before I move on to its suburbs and the rural areas of Jefferson. I do have a lot planned for that. I have not done much work on the wiki yet, I plan to do a lot more in the future.

Demographically, the wealth in the city is concentrated to the south and east, with some exceptions.

Recently I’ve been working on the south side of the city. This is an area along the river, a few miles south of Center City. It is very “old money.”

Center city was the first area I mapped. I hadn’t used JOSM for very long and as a result, it is not some of my best work. Some day I might decide to redo it, since it is the focal point of the city. But that would take a lot of work.

I’m most proud of how the areas around the perimeter of the city have turned out, for the most part inspired by 1950s suburban development in the US.

Lots of work is being done, much more planned, stay tuned! And thanks for taking the time to read my post.

I’ve finally been working on adding to my wiki and one of the things i’ve been focusing on are businesses in my country. I have begun to set up a stock exchange in Jefferson’s capital. I was curious if there is some sort of international stock market or if businesses remain largely national.

If there is not, we should figure out a way to create an international listing of stock symbols, and their respective stock exchanges. This would also help create a searchable list of the OGF world’s most important corporations.

Is anyone else interested in this and has it already been done?

I wanted to get some people’s input on how I should go about tagging land use for Patriot City.

I have noticed that everyone seems to have a different approach when it comes to tagging landuse. For example, Luciano has very little tagging in his large city, Villa Constitucion. Whereas Leowezy tags a decent amount in his city of Ro.

Yuanls tags even more elaborately in his smaller city of Ellmouth.

My question is, how elaborate should I go when it comes to area tagging. For example, if I tag an entire neighborhood residential, there may be businesses in that area, and vice-versa for the downtown. I would also like to maintain a certain amount of uniformity with my tagging throughout the city.

Should I just tag the city center and key focal points as commercial and the rest of the city residential? Or go all the way down to the parcel level? (could take years)

Just wanted to get your input. Thank you!

Posted by Thunderbird on 27 January 2016 in English (English).

I’ve been working on a new toll road north of my capital city. It is a turnpike style road, with limited access and toll booths at each end as well as at each exit ramp. I mapped the southern toll plaza here:

It has 6 booths in each direction as well as service ramps for the workers. That was my first attempt at it. Could people give me some feedback as to what I did wrong or if this needs to be improved?

Foreign company needed for my mall

Posted by Thunderbird on 12 January 2016 in English (English).

Detailed work continues on my nation’s capital. On the north side of the city, still within the city limits, I have built a mall. The mall has four major stores along the outside. I would love to offer someone the opportunity for me to import a store of another country.

If anyone has a shop (department store or something else) you think would be good for a mall, I would love to import your products and build a store here in my city!

Posted by Thunderbird on 16 November 2015 in English (English).

The map has a new rendering. In general, it appears as though every road has moved up a level in color. My city is composed of mostly tertiary roads, and it looks ugly with this rendering. Is there a setting to change how it looks?

Posted by Thunderbird on 6 November 2015 in English (English).

On this 6th day of November, 2015 the Free Republic of Jefferson was founded! The government is libertarian, with a lot of freedom for the people. There will be much more to come!

The people of Jefferson would love to trade with other countries! Look forward to hearing from them soon!